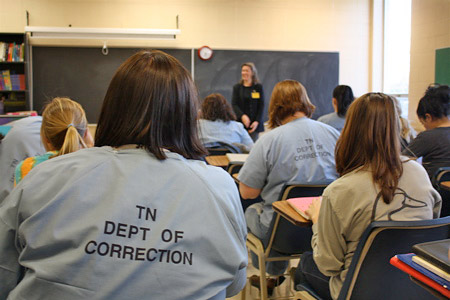 Jameel Spann was a junior year at Fisk University when he got arrested. Facing a 15-year prison sentence, he didn’t know if he’d ever graduate.

But after more than a decade in prison, he says he got lucky. A nearby university started offering classes and encouraged him to apply.

“It wasn’t like I forgot that I was in prison, but it was like, suddenly, my time in prison was being spent in prison in such a meaningful way,” he says. “I wasn’t sure how it was going to have an impact or make a difference, but I was fairly confident that it would.”

Since his release in 2017, he’s earned his bachelor’s degree from Washington University in Saint Louis. He’s also joined a national nonprofit that helps other incarcerated people get into college courses. And this fall, he moved back to the city where he started his journey in higher education to work for the Nashville Community Bail Fund.

Spann says Pell Grants will allow others to find success when they’re released, instead of ending up behind bars again. The grants are a federal aid program that help low-income students earn degrees and they’ve just been made available again to people in prisons.

The federal stimulus bill ended the decades-long ban on Pell Grants for those who are incarcerated.

“To be given the opportunity to get an education, to increase your employability skills, to broaden your critical thinking skills, to just elevate your entire life experience is a tremendous value-add for anyone who is trying to rebuild their life,” he says.

The legislation is expected to have a major impact.

In fiscal year 2018, just 421 of the Tennessee’s 22,000 prisoners were enrolled in college-level programs, according to the Tennessee Board of Regents. The new access to Pell Grants would expand access to about 10,000 people who meet the academic requirements to participate in higher education, according to a 2019 report by the Vera Institute for Justice.

The criminal justice reform think tank says that Pell Grants would boost employment rates for people who leave prison with college credits by almost 10%. Researchers also estimate increased access to education could save the U.S. more than $365 million each year, since fewer people will be re-incarcerated.

“The restoration of Pell Grants for people in prison is going to be a game changer,” says Molly Lasagna, the director of the Tennessee Higher Education Initiative.

“We’re actually ahead of the curve in Tennessee,” Lasagna says. “In the last several years, the state of Tennessee has been doing quite a bit of thinking and infrastructure building around higher education prison programs.”

That includes more money in the budget for career and technical training in subjects like computer sciences and building construction. The state has also built computer labs in correctional facilities, which Lasagna says has allowed her organization to keep classes going during the pandemic.

Lasagna hopes expanded access to Pell Grants is just one more step toward better education for people who have been arrested. But she says it takes more than federal financial aid to educate people in prison.

Lasagna says many people in prison have had negative experiences with school in the past and need more coaching on how to navigate the process. She hopes colleges will be mindful of the unique needs of these students as higher education programs expand behind bars. And that schools will help them to prepare for life after their release.

“We’re really working to set these students up for lifetime autonomy and success,” Lasagna says. “I think that’s ultimately the aim of higher education.”

< BACK TO ALL NEWS + EVENTS
RECENT News + Events
THEI is Participating in the Big Payback
THEI Releases the "Moving Forward Guide" a comprehensive resource for individuals preparing for and transitioning beyond re-entry.